I am pretty good at choosing unusual ways to spend my wedding anniversary; waking up in York YHA is possibly the oddest yet! After the appropriate texting for the occasion and another splendid veggie breakfast, I was on my way by 8.45am. I was relieved that the undulations would be only moderate today and the line on the map was rarely due east; the easterly wind was still blowing and a full day of headwind wouldn’t be much fun. As cycling cities go, York is meant to be pretty good. I would argue that it helps to be in the know here. The signage wasn’t too great and I tried to enjoy the sights of the Minster and the Shambles as I wove about sniffing out  the Way! 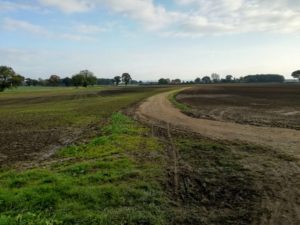 Off roading near York

A few miles outside of York, the route researchers must have had a bit of a laugh as they had selected a track across fields. It was nice and firm on this dry day and a good exercise in focusing where my front wheel was heading. I am not sure I would like to be met with this on a wet day. Headwinds were a theme for the first part of the day and I was very relieved to eventually arrive in Pocklington, where my guidebook suggested there would be a cafe in a Buddhist centre a little way on. The cafe exuded Peace; the kind which could have seen me sitting for hours and not riding to Bridlington! I clung onto my motivation and filed away a memory of another lovely place discovered.

I was aware that I was now in the foothills of the Yorkshire Wolds; tiny hills in relation to yesterday’s Dales but with a unique and very remote charm of their own. I understood why David Hockney was attracted here to paint, such was the light. However, I reckoned without the ‘invisible hills’ – roads which appear level or even to be descending, yet are a struggle to ride. I questioned my bike, my legs, at one point my sanity. Only later when I read this section of the guidebook did I understand that ‘the ascent can be surprisingly tiring for weary legs’. I 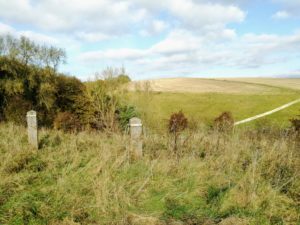 spent the next couple of hours riding on what felt like the top of the world and, indeed, I did sing!

Pocklington is an unpretentious, friendly town and it was bustling on market day. I found my first curd tart of the journey and that was probably one of the highlights of my trip; curd tart fans will understand this! The road sign announced 18 miles to Bridlington, nothing at all really for an afternoon and it didn’t disappoint. Winding along lanes, often close to the railway and over traffic free crossings, this was another new area to discover. Another muddy section took me down Woldgate and past Gypsey Race, the Wold’s main stream, to the outskirts of Bridlington and what seemed to be a comprehensive tour of the town before finally depositing me on the promenade. The light was just beginning to fade (incorrectly in my view, not being over the sea, where the sun is meant to set!) and a kind passerby took my photo by the sign 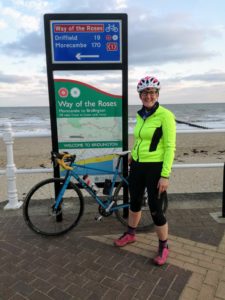 Coming out in empathy as she recalled riding the Way a couple of years ago.

I treated myself to a bed and breakfast in Bridlington and it was a really comfortable nignt. I would decide whether to ride to Cloughton in the morning to be reunited with the family and for a few days of relaxation